So, can anyone identify the mysterious Mr. Toad shown below?

Last Friday, two co-workers and I were among the last people to leave our offices for the long holiday weekend.  It had been raining all day, and when we got to the parking lot, we found Mr. Toad waiting for us:

The picture really doesn’t do him justice.  He had a wonderful, brilliant green face — and a defiant, belligerent expression.  Which makes more sense if you see where we spotted him: 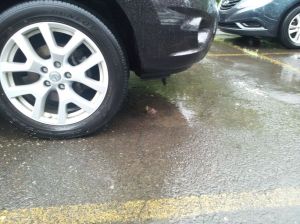 Yes, that’s him.  Right under the bumper of — and in a standoff with — my co-worker’s SUV.

We walked up next to him and he just held his ground.  We aimed cameras at him and he didn’t bat an eye.  My co-worker started her car, and despite the roar of the engine over his head, he didn’t give up an inch of pavement.  For long minutes he refused to yield — and when he finally moved, where did he go?

Further under the car.

Fortunately (through courage, good sense or sheer terror), he held still when the car backed up, and as we left the parking lot and headed home, I could see him in my rear-view mirror, still hopping around in the puddles.

We have a parking lot that is bordered by a strip of mixed trees and bushes, and through that wood flows a tiny stream.  As a result, we have wildlife — deer, groundhogs, voles and mice, the occasional skunk or garter snake, a resident fox and numerous birds.  But this is the first time I’ve ever seen a toad — or is he a frog? — anywhere in the area.    He (or she) may have ventured out in search of food, or perhaps the poor thing was driven out because the stream was overflowing its banks (the first time I’ve ever seen it do that).

It was a lovely gift of Mother Nature and made us all laugh as we headed home.  Now, if only I could identify his species.  I’ve had no luck finding that face in any online databases of wild animals.  A trip to the library may be in order this weekend.

Meanwhile, let’s all admire the courage of Mr. Toad, who faced off with a behemoth SUV — and lived to hop another day.